I’m so sick and tired of people complaining about illegals. When you hear people talking about the immigration problems there is all this harsh rhetoric about how these people should be punished because they broke the law. THE LAW! How dare they! Where in the hell did these immagants get the idea that was a land of opportunity, a place where the tired, the poor, the huddled masses could come to breathe free. The nerve of some people. These illegals act like we have some sort of beacon shining at our borders edge calling out specifically to them!
Look, I get it we do need some measure of control on our borders as there are safety concerns in terms of truly illegal activity taking place in the nether regions between nations. What I want is for Americans to get the fuck off their high horse about the major affront to our great nation of coming to this country and trying to make a life for yourself. Americans act like all of their ancestors filled out tons of paperwork and waited years before they could come into this country instead of just showing up which is just bullshit.
Then there are the people who leap to the “defense” of the legal immigrants like they are fierce advocates for their needs. We need to punish the illegal immigrants to be just to the legal ones. Otherwise all of the struggle that legal immigrants went through would be cheapened and undermined. First off people act like living without documentation is a land of milk, honey and free medicine. Get this in order to remain under radar you generally have to strictly adhere to the rules. Over the last decade the enforcement of deportation has increased. A bunch of laws were changed from jail time to deportable offenses. It is so severe you are retroactively culpable. So if you committed a crime that was previously not a deportable offense and served your time, in other words “repaid” you debt to society and then committed another crime that wasn’t a deportable offense, you could still be deported.
Think about this, imagine, lets say you’re a guy and you get busted for public urination. Something I imagine a lot of guys have done at some point, because the legal impact is practically nothing. Well okay you get caught and get a fine you pay it and then ten years later society decides that this is a criminal act and you’re a disgusting animal if you think this is the way society should work. The punishment is now mandatory 10 years and it’s retroactive. Now let’s say you’re at one of your fine flag waving demonstrations where country music stars cry into microphones about how much they love , and a bunch of liberal hippie communist come charging in to cause a ruckus. Now lets say in the ensuing melee you ignore the police order to disperse, because this is your damn country and your not going to let these hippies stop you from seeing ted nugent rock out, and lets face it you’re a little drunk. Well now you get arrested for disorderly conduct, at your arraignment your previous transgressions are brought up and they see you didn’t do any jail time, well guess what buddy now its ten years in the pokey for you.
What makes this whole mess all the more infuriating to me is the two faced nature of the exercise. All the anger and hate is directed at the immigrants who for the most part are barely surviving here, but are still doing better then in their native land; meanwhile there are entire industries making a killing from employing the immigrants. These small businesses and large corporations get the equivalent of parking tickets(well not New York city parking tickets, but you know regular parking tickets that individuals can actually pay) while we are talking jail time and debilitating fines for the workers. It is beyond bassackwards it is totally bent. If we really wanted to address the problems that too much undocumented immigration causes we need to address the reasons for it in the first place. If we attacked the failed economies of emigrating nations and imposed stricter legal ramifications on businesses failing to comply with existing labor laws we could stem the tide of unwanted migration.
As for the immigrants that are already here, we need to embrace them into our society. Perhaps we make it take longer for them to achieve citizenship, and perhaps they have to abide by stricter regulations but a clear path towards immigration must be presented. All talks of heavy fines or criminal prosecution will only balkanize these communities making them harder to penetrate and achieve the level of transparency necessary to prevent criminal cabals from forming strongholds within them.
This is the only true path for humane reform for lest we forget, as the poem says, we are the mother of exiles so: 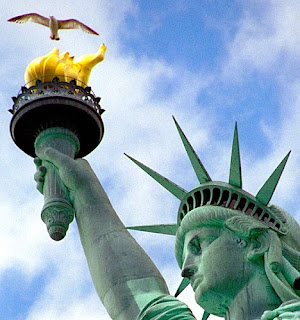 “Give me your tired, your poor,
Your huddled masses yearning to breathe free,
The wretched refuse of your teeming shore.
Send these, the homeless, tempest-tost to me,
I lift my lamp beside the golden door!”

← Perhaps Sarah isn’t that dumb
I am not okay with this! →