Lost in much of the talk about our failing economy is the real disparity of income that has existed along racial lines. This is mostly because this information is nothing new. For as long as we have been keeping data on this there has been this huge disparity.  Demos has a new interactive site tracking poverty in America over the last 50 years. Flipping through the page I felt the blood curdling sickness that is the legacy of structural racism. To unpack what I mean we have to dig a little deeper into the numbers.

Before we can understand the implications of the data, we have to know what the data says. The Demos chart characterizes poverty as earning less than $17,400 dollars for a family of three.  For a house hold to have a balanced budget, financial experts typically recommend a breakdown of expenses along these lines:

Which gives our family of three a cost breakdown of:

But wait, you say, people at this level have access to government assistance, Food stamps and such. You’re right, there are a wealth of programs to help the poor, for the purposes of the discussion lets zero out food costs. While there are other government programs that will help reduce living expenses, for the most part the numbers here are still laughable below what is necessary to survive and grow. In that case the breakdown only changes slightly:Now I live in new york city, so understandably there are cheaper places to live, that said, $363 dollars a month will not get you a room much less an apartment even in the Bronx. By the way don’t get sick, because $73 dollars a month is going to go far if you have anything approaching seasonal hay fever.  Still the biggest problem is the savings. at a meager $145 dollars a month, this family will have a hard time affording a new car without years of savings, let alone something like a college tuition.

The numbers become more depressing when you realize nearly half of people in poverty are considered deep in poverty and as a result earn less than $8,700 dollars a year which breaks down to:

As enlightened as modern America likes to claim it is this does not negate the discrimination that took place in this country since it’s inception. This discrimination prevented Blacks, Hispanics, and other minorities from owning homes and businesses, blocked them from higher education, blocked minorities from much of what creates actual wealth in this country. Without access these communities were forced by their society into poverty. Thankfully we have eliminated most of the most egregious of these discriminations but much of the poverty it caused remains.

Let’s go back to that family of three earning $17,400 dollars a year. Most banks want at least $2000 dollars in savings in order to avoid paying fees on checking accounts. Sure there are free checking options offered by many banks, but most require direct deposit of your paycheck to get it. Most of the working poor have jobs that would not have a direct deposit option. As a result they have to use independent check cashing services for any checks they do get, and use money orders to pay any bills they have, both of which charge a fee just to use their money. If they did somehow manage to save up enough money to have a checking account, or they have a job that allows them to access one of these free checking accounts they are charged extortionist fees if they are even a dollar overdraft. If they have any kind of credit it is bad, with interest rates in the 30% or higher. Insurance, all kinds of insurance costs more if you live in a poor neighborhood. At every level of interaction being poor in America means being charged more to do what most Americans take for granted. Not only do they pay more, they get less, their schools, hospitals, social services are all in worse shape due to our every man for themselves culture.

When we talk about the poor we often look to blame them for their situation. We say things like they’re lazy, or they are into drugs, or they waste their money on flat screen tv’s which is supposed to suggest poor financial choices. All of this is to suggest the millions of people are poor because in some way they have chosen to be poor. This is a self-serving critique, It gives us a reason to not do anything about the poor, at the same time it makes those of us who aren’t poor feel good, because presumably we aren’t poor because we made better choices. The truth is while yes all those things can lead you to become poor, they have little to do with the reasons why most of the poor can’t escape poverty.

The Rickety Bridge to the Middle Class

Things aren’t becoming easier either. One of the ways minorities managed to claw their way out of poverty was through Government employment. At many levels of civil service employment minorities have been able to find a home. I suspect this is due to two factors

These jobs provided stability and allowed many families to rise out of poverty and into the middle class. Unfortunately these jobs are now going away, both through privatization and our recent delusional pursuit of austerity. At the same time the cost of education is rising at astronomical rates. This is tragic as the surest predictor of poverty is education, again from Demos: 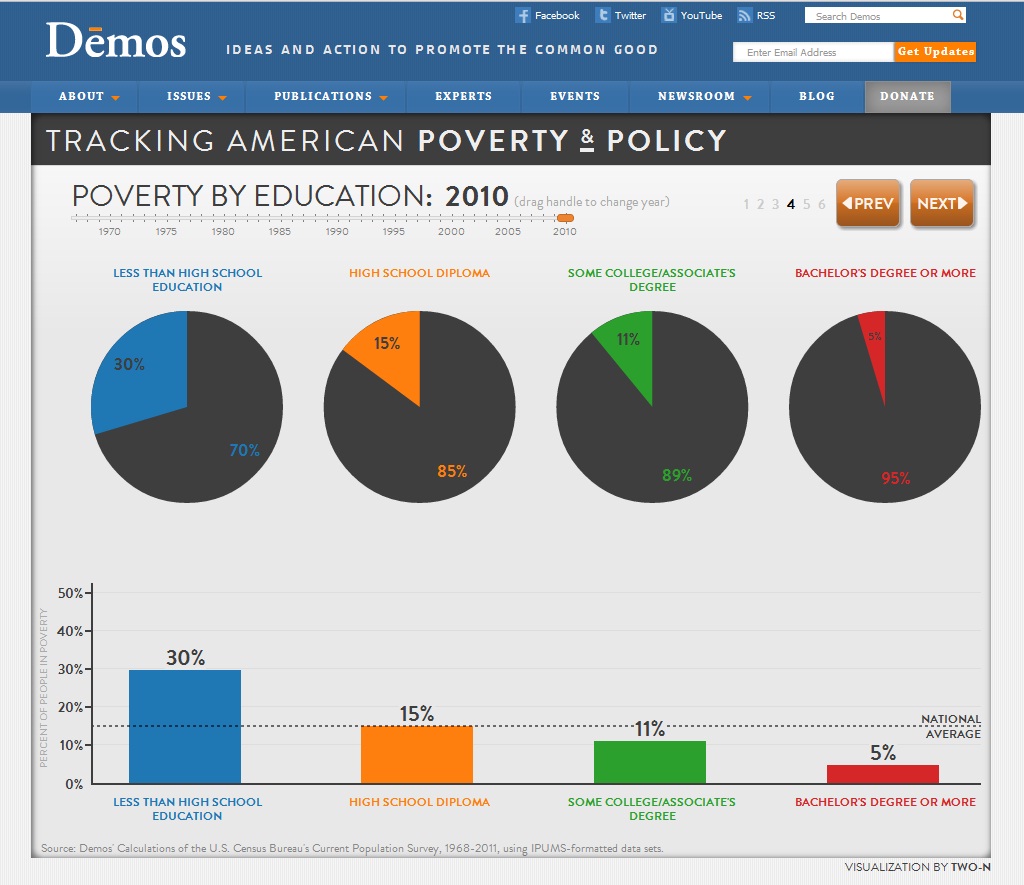 Together these changes in our society have made it that much harder for the poor, particularly poor minorities to navigate the path to the middle class.

Mitt Romney was loudly booed at the NAACP this week when he stated as president he would roll back the Affordable Care Act (Obamacare). In response after the event his campaign told reporters:

“Remind them of this, if they want more free stuff from the government tell them to go vote for the other guy — more free stuff. But don’t forget nothing is really free.”

The NAACP audience didn’t boo because Romney threatened to take away free stuff. The Affordable Care Act isn’t perfect by any means, but it is at least an attempt to mitigate one of the largest problems affecting the poor, and as a result a large portion of African Americans, and that is access to healthcare. Lack of healthcare can turn a broken leg from a 6 month annoyance to decades of crippling debt. Romney has not offered an alternatives to the current health care reform (largely because the current legislation is virtual indistinguishable from his idea). Repealing the Affordable Care Act without improving it would result in more poor Americans.

This is not a question of people pulling themselves up by their bootstraps. Our current structure makes it extremely difficult to rise out of poverty. For the wealthiest nation in the free world it is unconscionable that millions of Americans find it nearly impossible to achieve the dream we promise in the land of opportunity. Not the dream of wealth and fame, but the simpler dream of a good life. No one is looking for a hand out. What people are looking for is a solid path to prosperity. We need to fix this.