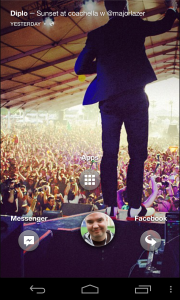 Facebook announced the long rumored Facebook Phone. What is interesting about it is that it’s more than a phone. In fact the phone is secondary to the experience. What Facebook really announced was Facebook home, an app the brings Facebook front and center starting with a few phones but eventually on any android phone. There is a lot to praise in this announcement, however there are a lot of things that are wanting with this experience also. I’ll cover both plus I’ll end this all with a nice long rant at HTC.

I’ve been saying this for a while now but companies are going to start looking at android first as the platform to launch on. The Facebook announcement shows how to do it. Facebook home will initially be available on the HTC first and a few of the more popular android phones like the S3 and the One X. As I said before in Fragmentation will not affect android part 3, this is how developers need to think. Long gone are the days when manufacturers released 30 different phones a year each one trying to carve out a new niche. Far too many manufacturers burned through far too much capital pursuing that old flip phone analogy. (HTC I’m looking in your direction.) So now we are seeing a maturing android smartphone market where each manufacturer will be able to support the few phones they release a year. What this means is developers will have less variation to contend with and therefore more incentive to reach the broader base of android users as opposed to IOS users. Facebook is the first company to recognize that being on Android first is not only possible but sometimes preferable, more on that in The Bad, part but for now bravo Facebook, making this announcement proves me right, but also and only slightly more importantly will show a wide range of developers what is possible with the platform.

None of that though really has anything to do with the actual app. The actual tech at the heart of the announcement. Unfortunately here is where my praise is a little thin. About the only thing really cool about Facebook Home is chat heads. Chat heads allows you to carry on a conversation without leaving the app you’re using. It’s the first big step towards true multitasking on your phone in a non-disruptive way. I read a lot on my phone and often times while I’m reading people will message me and it will turn into a long conversation. When that happened I’d often spend more time switching between apps then I spent reading or responding to the new message. Chat Heads allows you to keep it moving. If Facebook had made this announcement a week earlier I would have been gaga over it. However just before this announcement I began thinking about how frustrating the whole thing was and started looking around for a solution. I figured someone must have figured out how to use the new jellybean dynamic notifications to allow quick replies to messages. Turns out CyanogenMod had done just this and since I was already running a variant of it I’d had the feature all along (now get me back to Kansas). Still Chat heads are a great concept and having Facebook announce it will have developers scrambling to mimic the feature in some way which means it won’t be long before it’s more broadly available outside of Facebook home which again is good.

I have a lot of feelings about Facebook, but love isn’t one of them. Look I think Facebook is a great platform (I’d argue that Google plus is a better platform but that’s another post), but I see no reason to make it the central guiding principle around my smartphone experience. I obsessively use my phone and like I said in my post about the new HTC One the reason I use my phone so much is because it allows me to get things done. It is my assistant. It keeps track of my schedule, gives me reminders, keeps me up to date on the latest news, and keeps me in contact with friends, family, and business associates. These are all things Facebook wants us to do on Facebook, so I see why it’s in their interest to do something like this. The problem is Facebook is bad at doing all of those things, and they believe I should share all those things with everyone and my mom. Facebook Home is a great idea if you eat sleep and breath Facebook and live every waking moment on Facebook  If you do Facebook home is probably great, and also I’m probably unfriending you on Facebook cause man that’s far too much sharing.

The other bad is arguably the reason why Facebook home is android first. Their decision to be on android first isn’t probably due to some underlying market shift that Facebook is trying to get ahead of, ie the crux of my true argument, but simply because they couldn’t on ios. Facebook is essentially taking over your entire phone and subverting the brand that is android. Branding aside there are other concerns, Facebook home takes over your lock screen and disables widgets (for now at least) and hides the notification tray. In many ways it changes the way you use your android phone. Also the deep integration of chat heads for all messaging is only available on the HTC first. This all greatly diminishes the appeal of Facebook home for me but I still applaud the effort.

WTF HTC: Are you guys just trying to mess with me?

Dear HTC, What gives? For the last three years you’ve been digging deeper and deeper holes in the pursuit of making Sense the premier android experience. You’ve done this because you’ve wanted to build brand recognition. You wanted people to think HTC first android second. This despite sense being criticized as slow, bloated, and cartoony with needless transitions. This despite hemorrhaging market share. This while quarter after quarter of weak down right depressing earning reports. None of these were good reasons to subvert your brand, but for Facebook, FACEBOOK you’ll chuck all but the most modest of branding? To make matters worse Facebook did a better job of skinning then you! If you don’t like Facebook home on the HTC first you can turn it off almost entirely the only thing that remains is arguably it’s best feature the deep integration with chat heads. Come on HTC, you’re still my favorite hardware manufacturer but really who is running your company, does he ever listen to what people are saying about your devices? Not only that now you have another device to support what happened to the one strategy? Okay I’m done, Good Job Facebook, HTC… you’re on thin ice.